Our Operating Hours over the Christmas Period are as follows 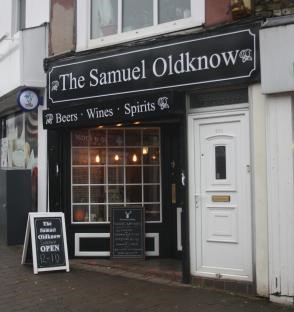 On 11th January we eventually got the keys to the premises of what was to be our New Business and work was started to covert what was then a Florist, into our Micropub. It was hard work for all of us involved, cold and tiring, but very exciting at the same time.

On 3rd February, I was painting an area above my head and stepped back off a two-step ladder and missed the lower step. It was frightening to see what a fall from only a couple of feet off the ground had done to my leg. At first the ambulance team, the first doctor I saw and my family all thought it was a bad dislocation but sadly the x-ray showed I had done serious damage to my knee joint and broken the bone below the knee vertically.

This was a serious blow to all of us because not only were we one man down in getting the premises ready, it created problems at home with my care. Everyday tasks were a struggle for a long time and although I had full support of my family, inevitably they would have to get back to the conversion at hand which would leave me alone most days for many hours.

It was a very stressful time to begin with, but after a few weeks I was able to help the Business by dealing with all the paperwork, ordering and researching what was needed from my sofa. I remember that we received a call from Liam at MicropubInsure to ask how we were doing, which I then proceeded to explain what had happened to me and how frustrated and useless I was feeling. It was at this point that Liam advised I could make a claim for compensation under the MicropubInsure Policy, not something that had previous occurred to me or any other member of our Business. The thought at that stage that I might get some compensation for my accident was a great boost to my morale and, as we were putting a lot of money into the conversation at the time when we were still not open and therefore not earning, it also gave us a little bit of light at the end of the tunnel to help towards the cost of being one man down.

One Liam had spoken to me it was a very simple procedure which he helped me through all the way. I had very little to do after the initial form filling and have since received compensation which has made a great difference to us financially, allowing us to take a bit less out of the company for ourselves and has indeed offered us real compensation for the frustration of the 3 to 4 months of immobility that I went through. There is no compensation that makes up for losing all that time, but I met so many people a lot worse off than myself and give thanks daily that I have had an injury from which I am now making a fantastic recovery. I believe everyone should be made to spend 2 weeks in a wheelchair to experience what other people go through daily and the hurdles that they must overcome; It is an eye opener.

Having the extra help from the Insurance was supportive at a time when the future was still uncertain. The Business, although it was in its first year at the time, is now doing well and the future looks very promising indeed.

I would recommend MicropubInsure to anyone looking for an Insurance company who understands the Business model and recognises what is needed to make a complete Insurance package for a Micropub environment. I originally got four quotes and MicropubInsure were the only company that knew what was involved and gave me confidence in their product. I did not realise that I was going to be testing the product so quickly, but I now feel that my original confidence in the company was warranted and they have been very supportive to myself and the new Business. I thank them and highly recommend them.